Already I appear to have finished uni and my time in North Wales, for now, has come to a close. There will be no more early morning post party scenes in our crack den of a loft, or our lovely garden, and the piss stained  mattresses will now have to be tidied away. The other week me and Nathan figured out that he had probably spent a good few months sleeping in the loft. What that says about Nathan, or indeed the loft is yet to be decided.

With flights booked to Canada mid August though I can’t complain and I’ve had a great time here. In regard to the academic side of my North Wales coin, I feel I’m all learned out.

So with leaving Bangor for a while, I couldn’t help but think back to what, other than the loft, I had enjoyed.

The slate is not a rock type I feel particularly drawn too, surprising as I like a crimp. Whilst essentially a hole in the ground, the quarries do still carry a certain charm and they have a rich history. However, I just always seem to find another option when someone suggests the slate. Nevertheless a route I did enjoy, and one of the few actual ‘lines’ on slate was the Rainbow. This vein of slate weaves up the slab and combines a technical and well protected first pitch with an easier yet much bolder second, which also provides the dithering leader with good pendulum potential. Alex Mason had tried the bottom pitch a few times with  no success, yet on this day in ‘freshers week’ three years ago I acted as his lucky charm and he made it to the belay. Having only climbed 3 routes on slate before this day (and not many more after to be honest) I felt even more lucky to also cleanly second the first pitch, and not pendulum down the often damp second pitch.

I remember expecting Doris to be a real case of Russian roulette. By no means is it solid, but as is the case with most things, the write up (or the imagination?) can often be  bigger than the real thing. I am not dismissing the seriousness of this cliff, more simply my experience with this cliff has been far more positive than its crumbling nature may suggest. After climbing Byzantium and belaying Nath on the brilliant Tonight at Noon I decided that Harmony looked tempting.

Benno had left a little chalk on it, so at least I had some indication as to which crimps were more stable. After a bit of a scary start I reached some sound cam placements and then proceeded to fuss around  trying to commit. Fuss came in the form of flipping the cams around a few times to make them sit better, and in the end I couldn’t prevaricate around much longer. Small holds on such a cliff left an unnerving feel but after committing to the first of these moves I soon forgot about the softness and crimped my way up to the break. Unfortunately, after a breather the final headwall doesn’t quite let up like you’d want it too. A brilliant route. 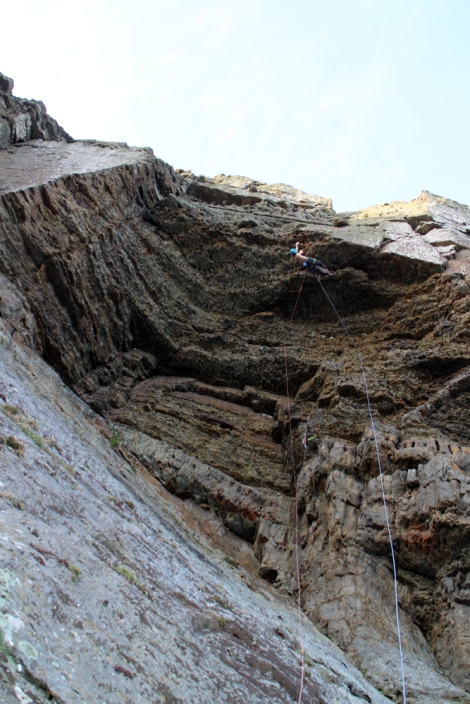 After telling Alex Mason I was already tied up for the day, traddin with Caff, me and Caff went to try a new route Mason had been trying. Caff assured me he had spotted the line first anyway, but regardless of this it had apparently been climbed 20 years ago…

Caff heads up first and after negotiating unnervingly sharp flakes, takes a sit on some cams. He then excavates the loose rock in front of him, and as he picks away gets closer and closer to just removing the rock holding in the kit. Fortunately the loose stops and leaves in its wake a sequence of guppies on muddy holds and sharp knee bars on loose fins. It was safe just very insecure, and these exploding knee bars cause Caff to fall twice. After this section the rock became more solid and we were rewarded with quartzite veins giving way to more normal climbing, and providing some very funky moves involving high heels and deep locks at about 7c+. Caff did it first, and not wanting to return in a few days, on what would be the day before a quick Pembroke hit, I made sure to also get it done. Waking up the next day  with  a bit of a battered body, I was glad I wasn’t off to Pembroke. 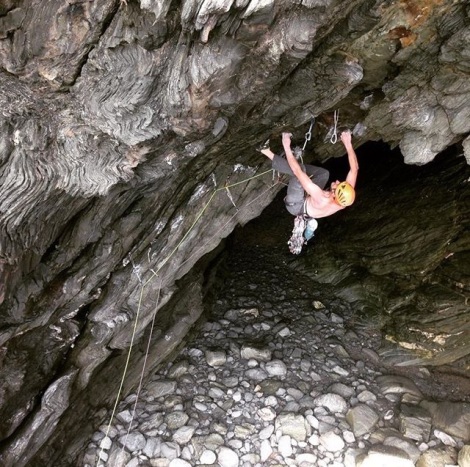 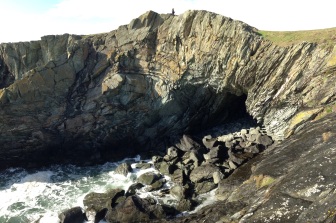 After a bit of the slog, Galt yr Ogaf sits proud and steep on the ridge. There is two particularly impressive routes up here, Heart of Stone and its daddy, Mission Impossible.

Heart lures you up to a pointy jug via a series of nice pockets and crimps which are probably some of the most flowing moves I have climbed on a trad route. Here you place some bomber kit and contemplate the runout/ airtime to come. Its definitely not easy, and I think it took me a couple of goes to crack. It has also given some excellent climbers some bother, like I dunno, Nathan? 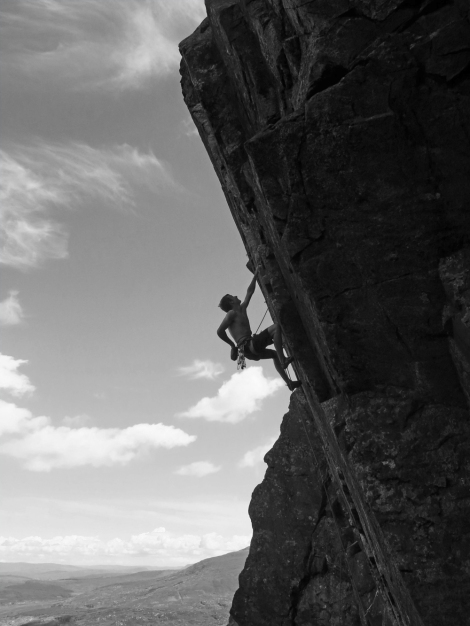 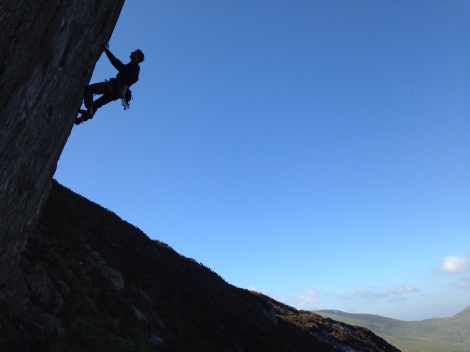 After climbing Heart I had a half hearted look at Mission but without a real brush didn’t glean much. 2015 I spent every waking hour at LPT and so with some good weather a few weeks ago it was two years later that I eventually returned for a proper look. Fresh from a Hen Do it felt hard and cleaning was tiring. What proceeded was to Caffs great amusement and quite embarrassing. Basically I’d underestimated what a weekend partying and then a cleaning session can take out of you, in respect of the previous session where the route felt a long way off. So when I rocked up for the second session having not previously done any sequences, third day on, and not feeling great after a warm up it looked like a lead attempt would only lead to a dismal effort. Ironically what proceeded was even more dismaying, somehow linking the whole thing. Now certain that I couldn’t lead it as I can’t usually do 2 times 8a+/b in a session, I repeated the whole farcical process again.

Next week I returned and after a warm up made sure to get it done. The climbing is brilliant, quite old school and therefore fierce. The first third is easy up to a good shake, after which a series of gastons tire you before a hard rockover off another gaston gains a small slot. From here slappy moves on sidepulls and poor feet lead to a brief respite. After placing a good cam a final heartbreaking move off a finger lock gives access to the top. I would have been satisfied climbing this route after an hour walk in if I was in Ceuse. However, given that instead its on a mountain in rainy wales and isn’t bolted I was slightly more satisfied.

This must be one of the least practical routes in North Wales? Even if you get to the top of the pitch you have to prussik out. I endured 3 days on ‘The Whale’ in the bottom of Wen Zawn with Tom Livingstone. After going the wrong way on the first 2 days we finally cracked the route after speaking to Adam about a misleading picture in the back of the guide. The start is typical Gogarth; steep thuggy climbing on thins and laybacks, but with some nice pockets thrown in. The top is more aytypical, with an array of crimps and small feet leading you back right to victory yarding onto the slab. A small tip would be to not wait for the sun to hit the wall before you give it a go, because when it does, it will probably be dark soon.

I’m only mentioning the crag here so I feel like my time down there wasn’t wasted. No it was alright, honest. Going down LPT and not getting up routes has really emphasised how much I actually like climbing, you know doing moves and not falling off the same one repeatedly, and how boring redpointing can be. Sport climbing in general makes people boring, but redpointing really saps the life out you.

Climbing Megalopa worked like a dream in hindsight. No backwards sessions, little stress, few sessions required. In contrast Liquid Ambar went something like; backwards sessions, stress, many many sessions, a large chunk of 2015 literally trying the one route, and not being clinical at all. I walked away empty handed, but I did get higher than Caff. Anyway after training with LA in the back of my mind all winter 2015/16 when it came down to it I just ended up going trad climbing. I’m sure one day I will do it.

I’ve really enjoyed the bouldering that North Wales has to offer, and seen as most of ones time as a student in North Wales is unfortunately during the winter months, I’ve actually done a fair bit.

I think a favourite might be the Lotus, as whilst it is a bit lowball it climbs really well and is in an idylic setting.  Another obvious contender is Cosmic Wheels on the Mallory boulder, again amazing setting and great moves. My favourite days bouldering however was probably watching Nathan and Emyln at Rhiw Goch, nursing moderate hangovers and more keen on the proceeding Indy Party than an outdoor woody. The core may have been lacking, as was the passion, but the frustration was certainly there.

North Wales, both rock and people have been ace. There are obviously tonnes of routes I have enjoyed and to be honest these are just the first which sprung to mind, and on another day I might have chosen differently.