Waking up on my first day in Bangor, I opened my curtains to glorious blue skies. As guessed, freshers week, and the weather is mint. My first thoughts wandered towards the Pass, where no doubt it was shaping up to be a perfect day. I have 3 years here, no rush I thought. But no, I want to go now. So I brought some pasta, realised there was in fact little else to be done on my first day as a student, hopped into the polo and headed out.

As I parked up by the roadside boulders I was greeted with the blue sky day I imagined and was more than a little jealous of everyone high up on the surrounding crags. But whilst I wasn’t yet on Right Wall, I still had a great little afternoon in the warm sun on the local classic that is Jerry’s Roof. I was pretty chuffed to get this in a session, until I was informed by those in the know that I’d only climbed it from the tourist start, and any bragging rights quickly diminished. Never the less I’d gotten the ball rolling. 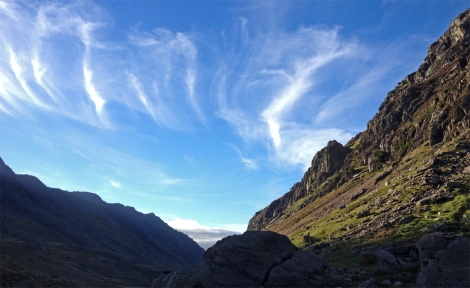 That was a month ago now and in short my time here has been proper good so far. The climbing is ace and incredibly varied, everyone is sound, Bangor it’s self ain’t too bad, and the Sports Science appears to (mostly) be of genuine interest.  Not bad ey. With so much to do I’ve just been trying to get the best feel for my new surroundings that I can, from the mountains to the sea, Rhyolite to Slate to Lime, wires to bolts to mats.

I’m not going to rant on about every great route I’ve done, even though I could, however some have been proper stella. So Warpath was one classic, and one hole in my cv filled in, Right Wall was everything I expected and more, but then King Wad has perhaps some of the best positions in the Pass? Rob Greenwood rated it highly too ‘How and why I never did this route whilst I lived in Wales is beyond me’. It must be good. Rainbow of Recalcitrance is another one for those that love lines, and this eye catching ripple is quite a line! Mason put to sleep the first pitch in fine style, a little nemisis of his, and then I wobbled along the ‘very bold, and often very wet’ pitch 2 wishing for some grit like friction. Perhaps more scary though was the mountain goat that came pottering along just before hand. I saw it, thought ‘that looks scary’ reasoned that it surely can’t be of any danger, yet up from the belay I here ‘Oli thats really dangerous’ and before I know it I’ve climbed Poetry Pink again in my trainers! 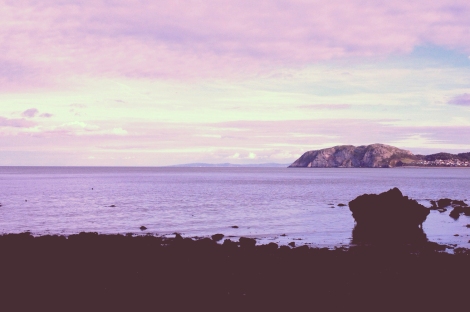 The weathers not been all that bad either, which I think in retrospect was what I was most worried about in the weeks leading up to moving here, i.e how much climbing will I get done? So either I’ve just been lucky or the tales concerning endless weeks of rain are just rumours designed to keep the English out.

When the weather is nice and your 40m up a face, overlooking the Pass, with ace climbing below and more to come, or driving back from Anglesey looking over to the mainland where the silhouettes of the mountains rise above the sea it’s hard to miss the grit and home. Hopefully winter won’t be too wet and bleak!

Oh, and I also climbed Jerrys Roof again, from the local start.