Last year I invested a bit of time at the start of the season into the iconic Liquid Ambar, it being my main focus for a while. I also had a dabble on pretty much all the other hard routes there, apart from The Big Bang (9a) and the more recent addition of Megalopa (8c+). I was pretty sure I wanted to get back on Liquid Ambar again this year, having sampled the other delights that LPT had to offer.

On return Caff had the clips in Megalopa, partly due to ease/ laziness but also the fact that it was one of the only hard routes down LPT I’d not had a play on yet I decided to have indeed have a play. I was impressed and took a liking to it straight away. After climbing Walking Mussel and getting to an ‘okay’ rest, positive yet small holds take you straight up the white headwall on a series of undercuts, ratty crimps and precise feet, to a good but never that good flatty, before a final pinch-smear-heel by your head rockover style maneuver finds you eyeing the grassy jugs .

I quickly got the moves done and was psyched. Another big attraction to the route, other than its quality was the fitness to be gained. Walking mussel alone is 8b+, then to the flatty on the headwall  8c, before a final (V5/6?) boulder problem. When trying LA last year I was getting strong on the route, but my fitness seemed to be lacking elsewhere i.e trad climbing, so I felt Megalopa would solve these problems. It hasn’t appeared to do so and I still get pumped on slabby E4’s.

After reminding myself how to climb Walking Mussel I soon found myself trying to recover on the poor rest before the headwall. Each session was a step forward, even walking in Scottland and Indy party scenes didn’t slow progress, or 8 days in Pembroke. Actually Indy party did = 1 backwards session. I really enjoyed the experience; falling off at the flatty 3 times in a session knowing that I’d climbed 8c to get there and was just getting fitter was great for confidence.

On return from a week in Pembroke the sun was out and it would have been rude to rest. Conditions were perfect even in the sun. Before going away I had gotten to the flatty 3 times but had arrived there too pumped to do much else, so it was to my surprise I found myself clipping the last clip, matching and setting up for the final few moves after a week of ledge shuffling.

Sure it would go next session, it obviously didn’t as it never works like that. Poor conditions brought failure and what felt like a bit of a tweaky finger. I decided to give my self one last session (or maybe two) before giving myself a break from the route. Almost unsure how hard I should be trying I climbed Walking Mussel like I’d never been on it before and found my self at the rest. Telling myself that failure didn’t matter this time due to the excess of energy wasted below I shook out like I always did, and then gave it a go.

The first few moves went as smoothly as always, but it’s always hard to tell how pumped you will be on the last hard moves, I think because they are so knacky. After clipping and matching I threw for the pinch, pasted my feet on the smears and watched my heel rise towards my hand. This time however the heel stuck, and the weight came off my arms a little. Almost watching my hands do the work, unsure if I was soon to find myself off, I drifted up the final moves.

Last year I felt like I had been a bit unlucky in respect to my sport climbing, perhaps trying the wrong routes, or trying them at the wrong time. Anyway, I’m happy with this. 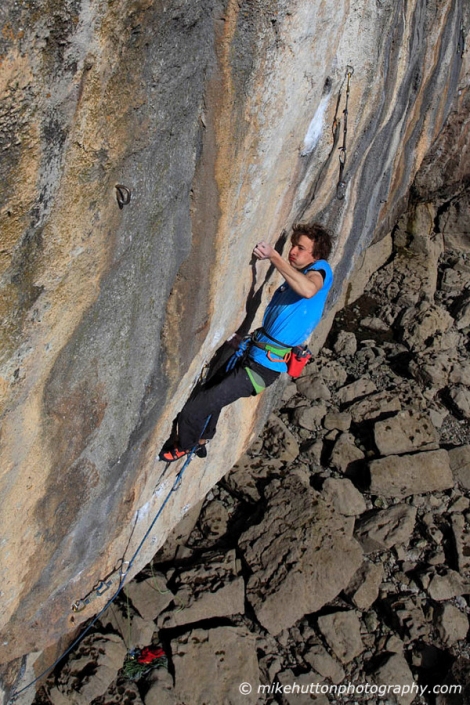 Thanks Mike Hutton for the photos: http://www.mikehuttonphotography.com